2010 had a little bit of everything:  a new world, a new pet system, Gardening, and a general blossoming of the game we've all come to know and love.

That Spring, I got back into the game I had discovered a year earlier. It marked a personal renaissance, but also a new era for Wizard101. Not long after I had rejoined the Spiral, a mysterious press release appeared promising the release of Celestia and an Advanced Pets system. 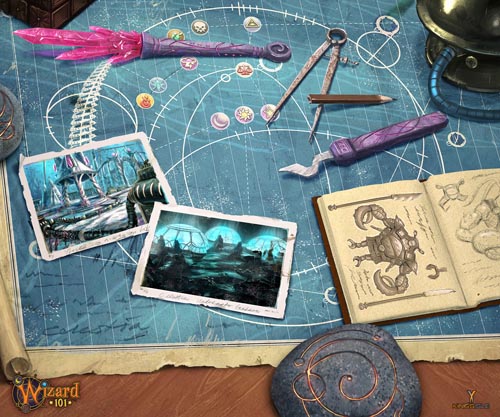 How exciting was that?! Sure enough, Advanced Pets was released a couple months later. This update brought hatching, derby races, and a fascinating complexity that encouraged a growing community to work together on new projects like Petnome, which debuted later that summer. 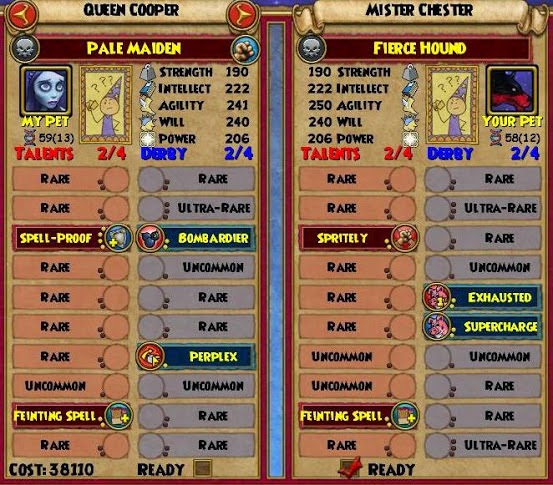 Of course, everyone couldn't wait to explore Celestia, but that summer of anticipation was unlike any other. In the meantime, we had distractions like July's preview quests (highlighted by the unforgettable Warehouse), and the brief celebrity appearance of Selena Gomez. Even if you weren't a big fan of pop music, Crab Alley was the first underwater area and was open to all wizards who had completed Unicorn Way. Novices and Grandmasters alike got to swim "round and round" and discover a new environment.

At last, a good seven months after the press release, Celestia came to the Live Realm in late October. Those last twenty minutes spent waiting for the servers to load were the peak of excitement for every Grandmaster back then. Many new friends were made under the sea, whether testing out the new moon spells (many laughs were had with the Gobbler) or beating a new boss who had the ability to do critical hits. 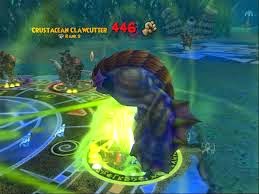 Celestia was enough to make 2010 my favorite year, but it wasn't over yet. In November, wizards were introduced to Gardening! The system wasn't easy to master, but to this day I still check on my large plot of Couch Potatoes. Mega snacks, anyone?

Even in between all the updates, I quested through the game all over again with wizards from different schools. After all, I needed more than one character ready when Celestia opened its doors. In that time frame, I got to discover the sheer power of Storm, ability to stay alive with Life, and had fun soloing baddies across the Spiral with Fire. 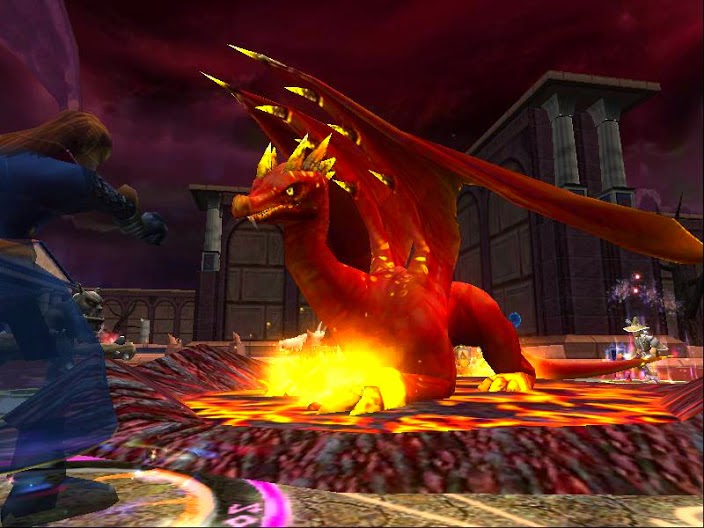 Perhaps it's purely nostalgia... 2009 might have been my favorite year if I had been around more. Everyone loves Grizzleheim's scenery and the utility of the Bazaar, after all. But even after four years and six worlds, Wizard101 in 2010 will always hold the fondest memories for me.

Posted by Arlen Dawneyes at 2:30 PM No comments:

Yesterday, I decided to do my 6th Nefarious Tower run. Nothing special had come up yet, but after a smooth ride with teammates Swordroll, Melody, and Kyle, we all got lucky. 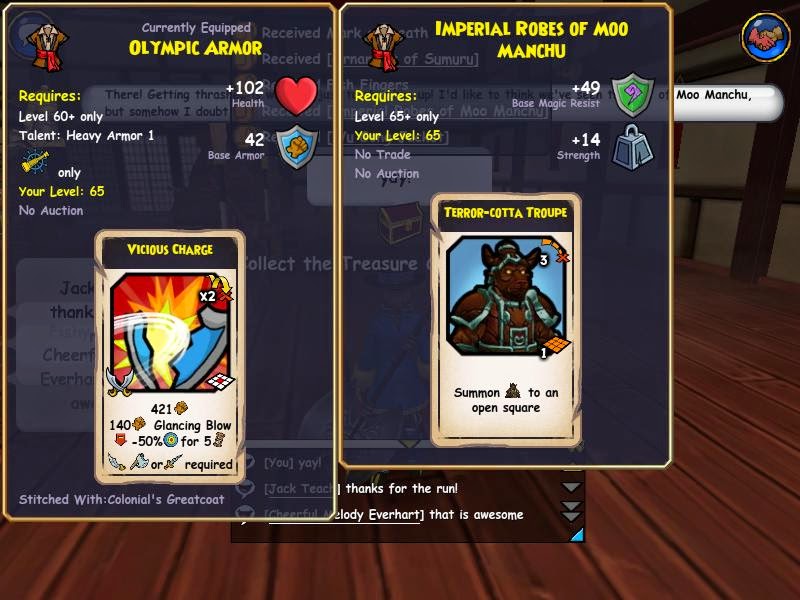 Getting Moo's robe was apparently a first for all of us. To top it off, I only needed to use the loot chest twice to get the best Privateer weapon. :D 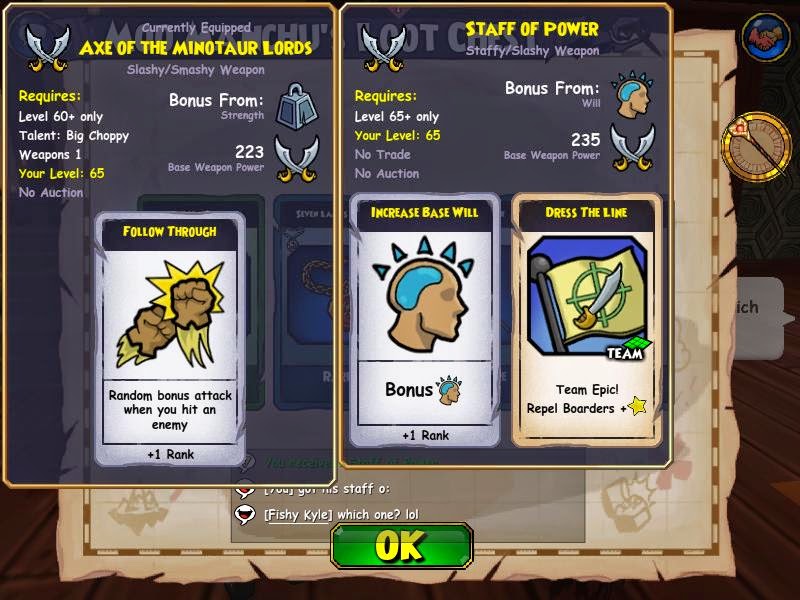 Needless to say, the end of that run was as perfect as could be. 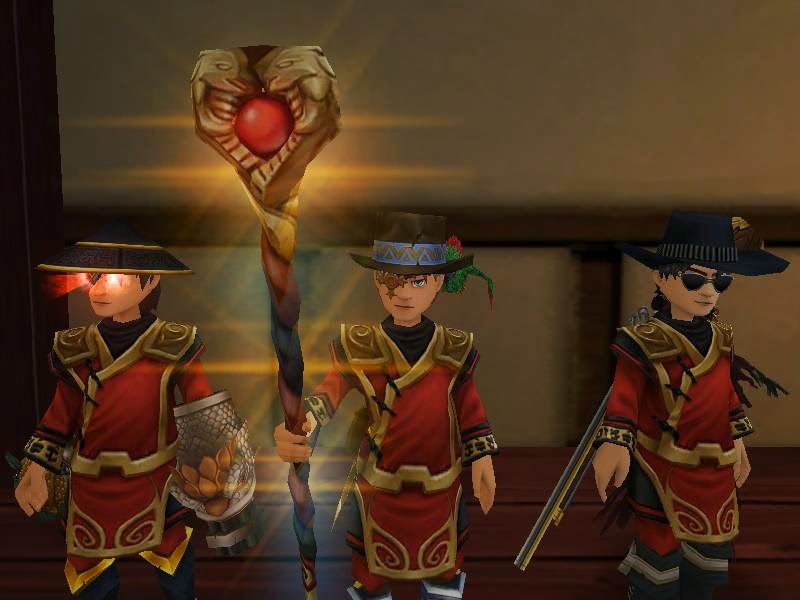 If there was ever something that made you think "this makes me look fat", it's this robe. The stats don't seem like much at first, but the card it gives is worth being pudgy for.
What does 'Terror-Cotta Troupe' do?

Yep, it gives nine Terracotta Warriors. They all have 699 health and multiple epic talents. A normal attack does about 80 damage, but nine of them are going to account for a lot more.

They critical surprisingly often, giving Blade Storm a bit of importance.
Most notable, though, are the other three talents. They're harder to hit at low health, with an ability to hit enemies on the run and stop advancing enemies. 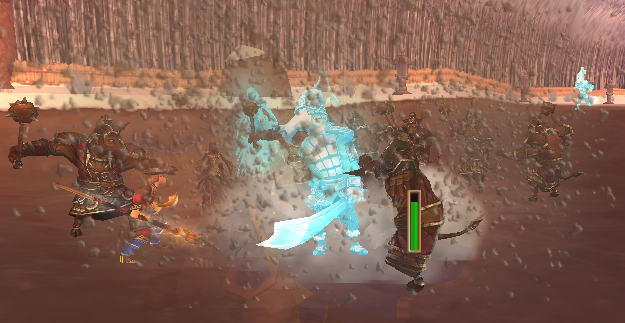 As if those talents weren't enough, their first attack is always Vicious Charge. Aside from doing extra damage, it reduces the enemy's accuracy as demonstrated on the left. This poor Stymphalian Bird will have to deal with -108 accuracy for five rounds.

When does this spell come in handy?

The problem with nine of these guys is animation time. That's nine clay figures rushing out at enemies, attacking one by one. Most battles can be easily handled; there's no point using this spell all the time. Taking that out of consideration, this spell is very powerful, and in my opinion, overpowered in some cases. The low health and damage isn't exactly an issue when there are nine of them. Plus, the enemies typically struggle to get a hit off with all those Vicious Charges.

Also, their Hold The Line 3 talent is tremendously useful if you're seeking to hold some particularly powerful enemies back. The Warriors can function as tanks here, with the added benefit of reducing their accuracy. 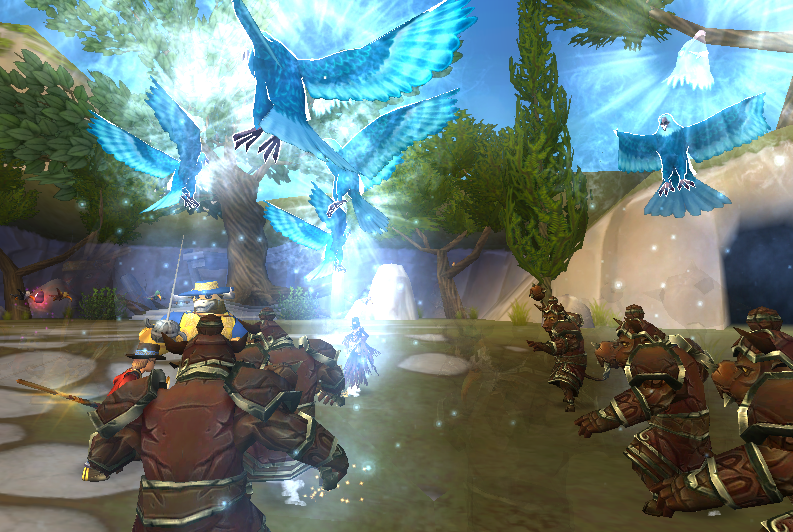 And they can be healed back to life (yay Privateers!)

I haven't tested it in the Tower itself, but the Terror-cotta Troupe could be very useful when coupled with Blood's Flames in holding back the Nefarious Five. The troupe would die before long, but the lasting impact from Vicious Charge cannot be understated. The Nefarious Five are hardy opponents, and making them miss on attacks takes many of their epic talents out of use. Hold The Line 3 also gives pirates time to buff or attack from long range (two ways to minimize the Privateer's love of Charming Gaze).

I did test them out on the Hydra battle. It didn't go so well... The scene after one round :P

In summary:
For specific battles, the Terror-cotta Troupe is a boon for pirates. Otherwise, they're just a time-consuming nuisance.

Best of luck to ye farming the Nefarious Tower! Aye, it's a pirate's life to farm ... and sail the great seas and all that stuff. 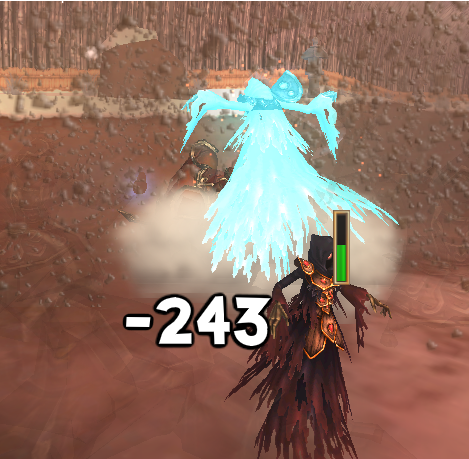 Posted by Arlen Dawneyes at 7:00 PM No comments: 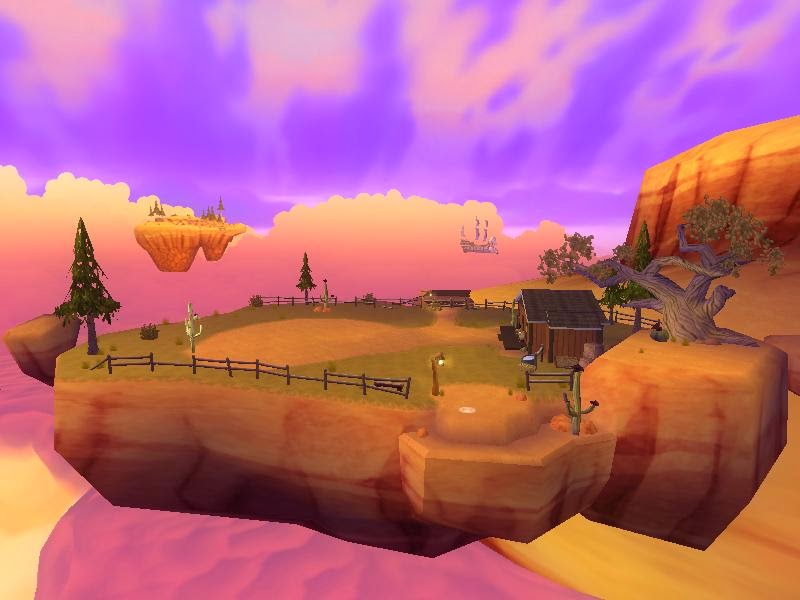 As chronicled during a post last month, doing one quest a day on my Witchdoctor during the summer was no problem at all. With a busy year ahead, however, I've been skipping more and more quest days, to the point where I've had to make up for 3-4 days of quests. Plus, Cool Ranch tends to have longer quests with bigger EXP rewards, so I've made a habit of doing this backlog on Sundays. 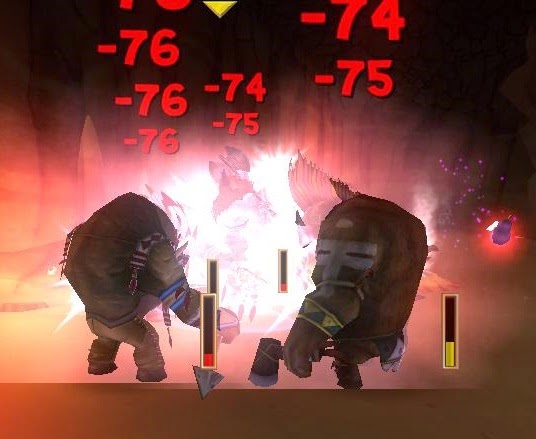 Two weeks ago it was the saving of Nurse Quinn... ...which gets pretty fun when the Ghost Jackalopes get involved :D

With such a slow questing schedule, I set all companions to Brawlin' duty, with training points used only occasionally. Last week, the time for Mormo's first quest finally came. Mormo is even cuter when he's bossy ;)

His third-person way of talking almost becomes contagious. Valkoor likes Mormo very much - Valkoor is only too happy to have Mormo as a first mate.

For today's questing, it was dispatching ugly baddies El Guapo and Santa Rana. 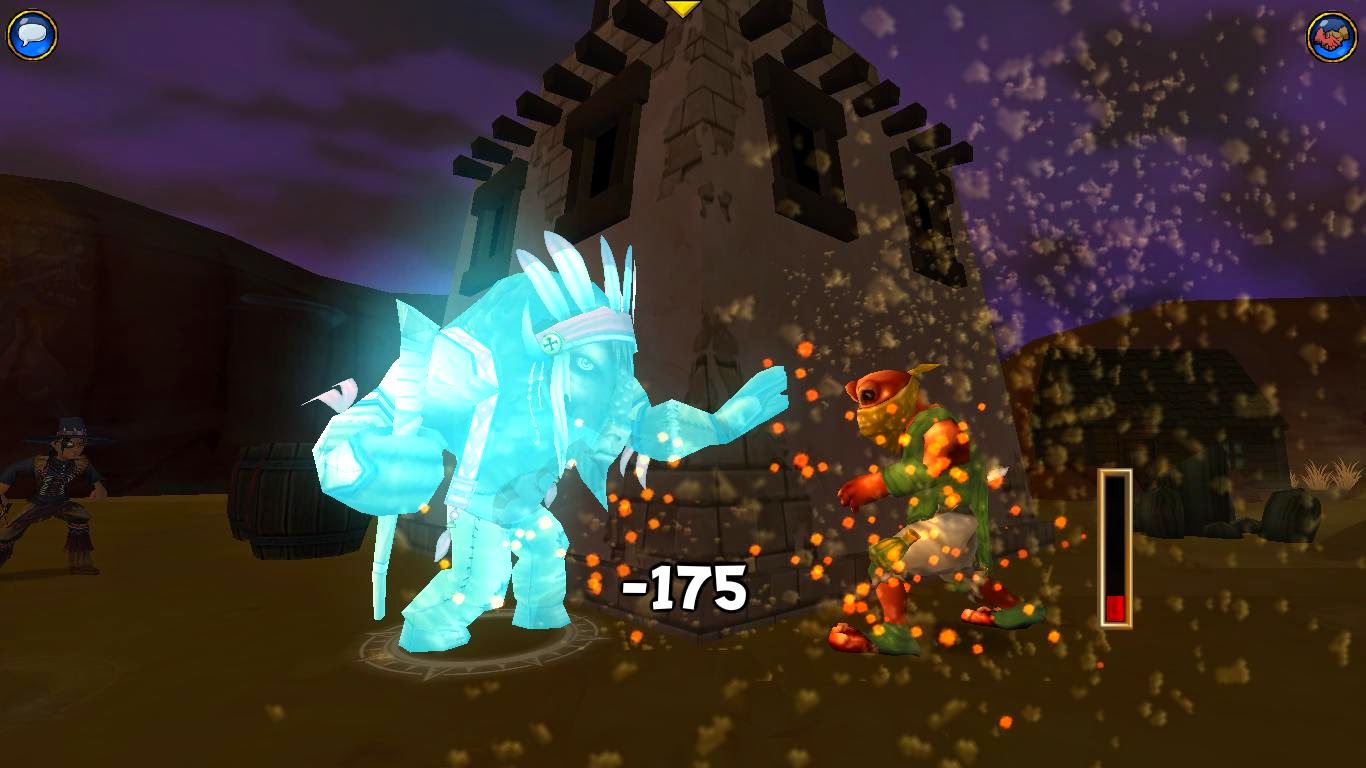 The Bison Spirit functions very well when it comes to tanking with an occasional big hit on the enemies. I'm pretty sure he's died a few more times holding Salamander stabbers at bay. 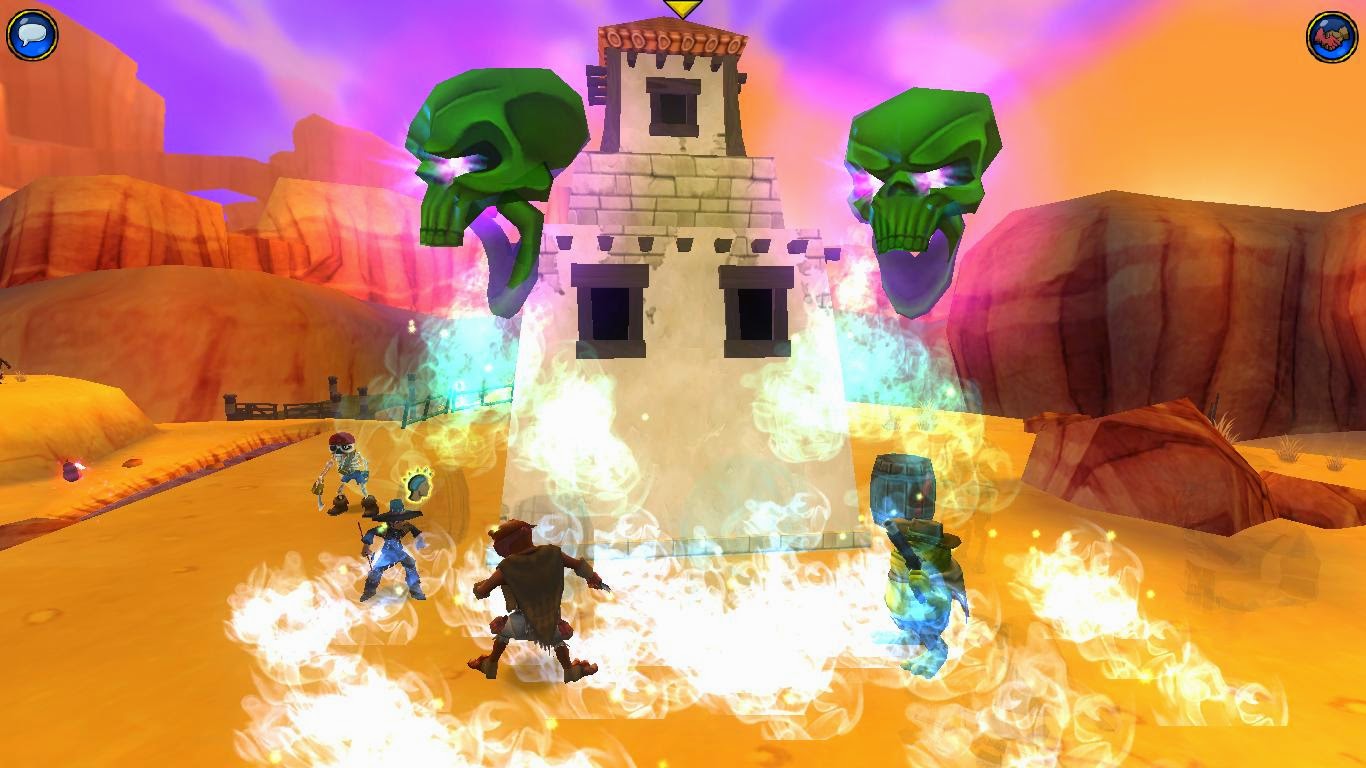 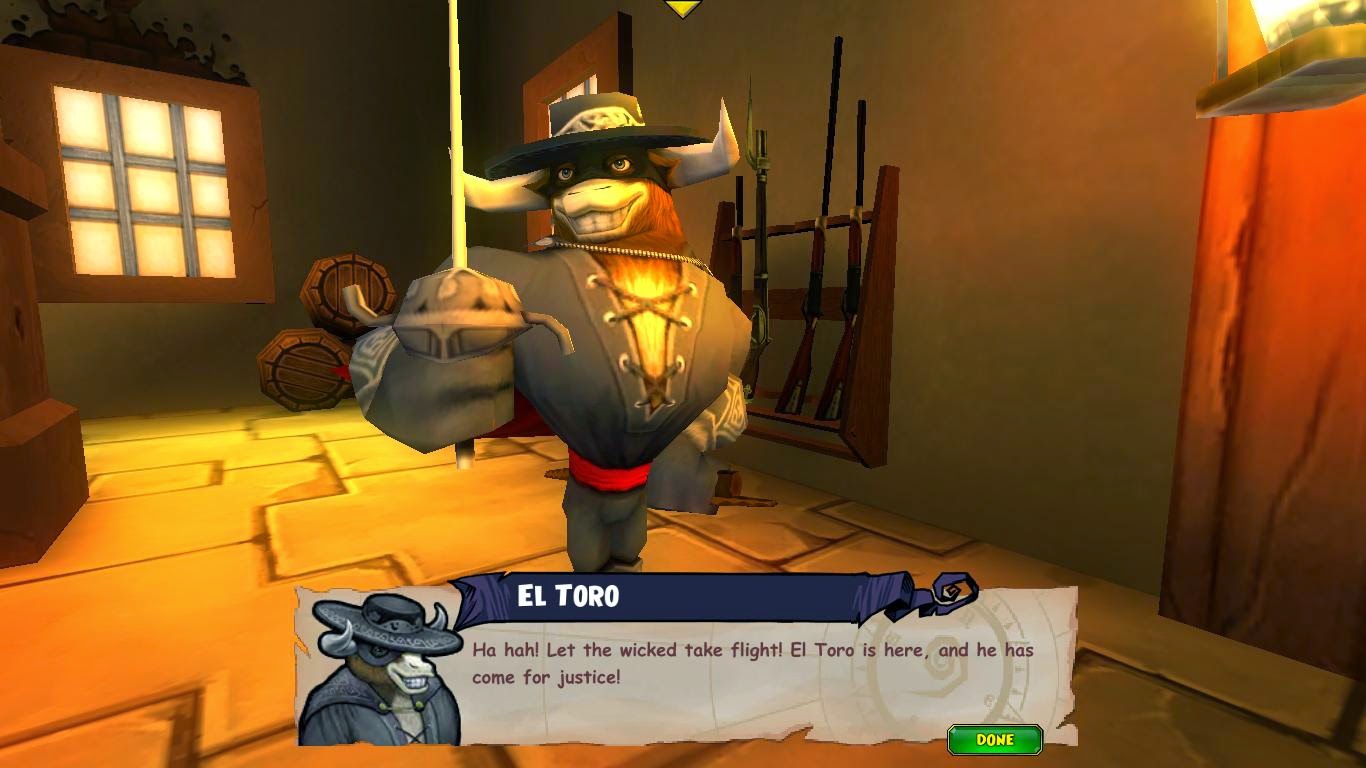 Meeting El Toro again was a welcome distraction from the cranky Frogerales.

Ah, faces only a mother could love. 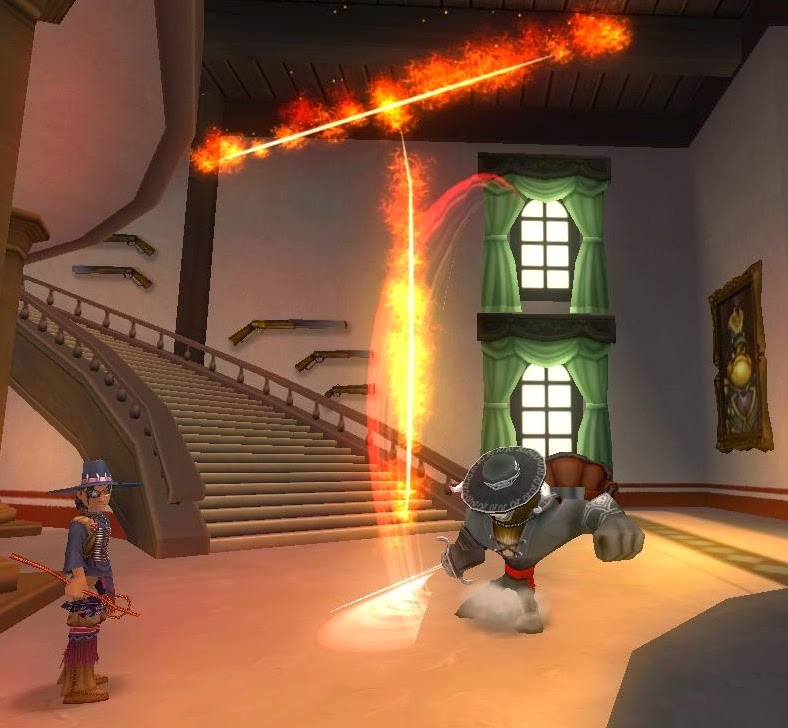 Finishing off Castillo Sapo with a flourish.

Over the next week, it appears as if Valkoor will be nursing the Free Ranger back to health while on the search for Tonka. Eh, could be worse. 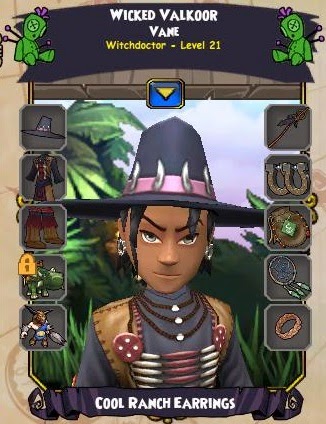 Level 21 and taking inspiration from punk hipsters. This is what makes questing exciting -- what will Valkoor look like after Level 30?! Only time will tell (probably about a month :P) 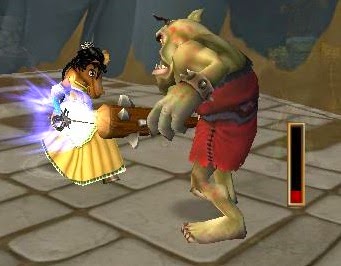 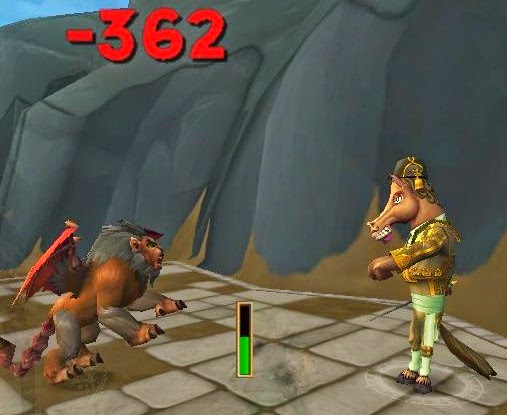 As if I wasn't getting enough of Cool Ranch, I went through Laestrygon with some throwback companions last Sunday. Jacques the Swash likes to bring out some experienced hard hitters every now and then for Trolls and Manticores alike. 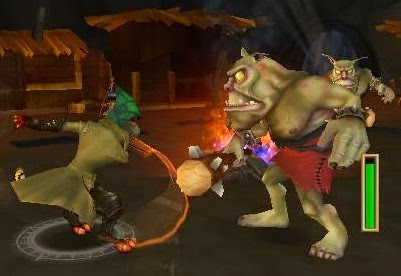 Even if he kidnapped the reincarnation of Selena Gomez, it's hard not to be impressed with Froggo Villa. Only in Pirate101 can you have a Salamander bandit facing off against Odyssey-inspired Trolls.

After another busy Sunday, good night, Cool Ranch -- for now. 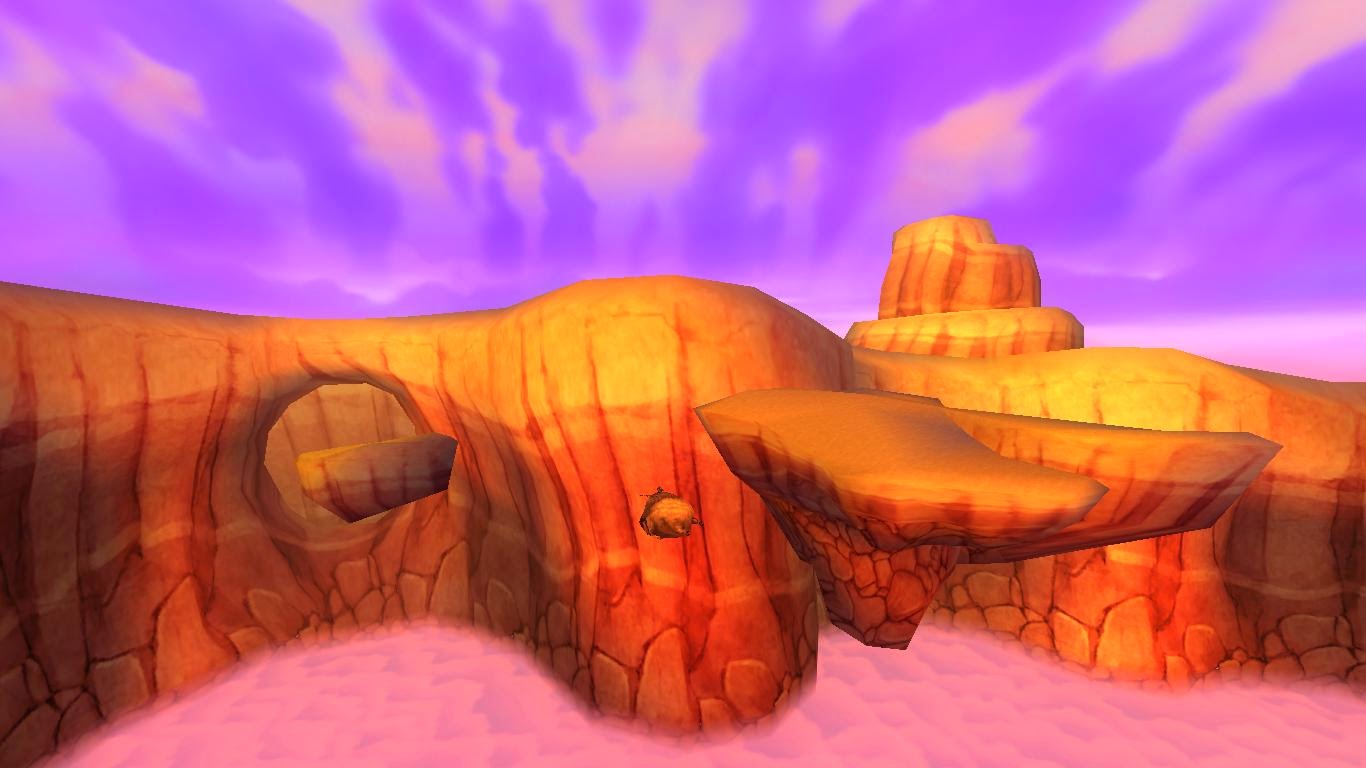