If you're a very long time reader of this blog and have a great memory, you may be familiar with my all too frequent runs of Kensington Park back in the day - a.k.a early 2011 (wow, that was long ago). In fact, I wrote a long story for a school assignment once, detailing what would have happened if Stoker had succeeded in taking over the city. But that's another story - although KP really helped out my English grade. Anyways, I did Kensington Park with friends or by myself at least a hundred times, if not more, largely in pursuit of the Antique Cello furniture item. I never got it from Stoker, but thankfully I was sold one not too long after. I never even got a measly Spider Golem or Seraph to show for my efforts *sob*. I got quite a few Hydrants and Pews, at least.

Recently, I've gone back to Kensington to experience the change that was implemented in the April 2013 Update - "Kensington Park has been shortened". Okay - that limits the nostalgia a bit, but hey, it is shorter, right?! But just how short? Let's see...

Kensington Park is rarely noted as a prime reagent spot - but you can count on getting an Ore, Scrap Iron or Stone Block in many nooks and crannies. Spots with a nice mix of reagents usually reside behind one of the six bosses in this dungeon. In fact, I've got something related to this near the end of this post...

A couple more pieces to my assorted Hydrant and Pew collection.

Going through time and time again, I've memorized these lines, but Gyro's accent is still funny as ever.


Next up was the ramp to Stoker's. Also a perfect opportunity for an image recreation.

I haven't really changed besides wand and image quality, really. Level 60 was still the Level Cap then (50 just a couple months before!)
I've still got my "HOUSING ITEM OF THE DAY!" set up in my pleasant abode, too - including the Dog House and Potion Motion still inside.

Well, there's that, and my fabulous music box.
Moving on, though. I haven't played Potion Motion in years..

Now we get to the shortened part, as the update said - if memory recalls, there were 3-4 levels of golem and spider clockworks to beat between Stoker #1 and Stoker #2. Since April, those levels have been removed, thus shortening the dungeon (remind anyone of the Counterweights?). With that, Mr. Waggs above quote is technically incorrect. "Lots of help from other malfunctioning clockworks"? Yeah, right :P

My only qualm with the update is that the notorious (well, to me) Metal Head minion has gone extinct. It is no more - gone to meets it maker (Stoker?). This minion occupied a floor or two of the old Kensington Park, welcoming anyone who entered with the feared words...
"You like music? Well, come on and dance to some Heavy Metal, Wizard."

Metal Head, I'll miss messing up your programming features, over and over again.
But, away from the unnecessary nostalgic feelings, Stoker #2 follows immediately after Stoker #1 now! Yay!

I failed to take notice of my health several times (there aren't any health wisps, as always :P), but a very well-timed critical frog saved my bacon. Thank you, my gross, fat friend.

Nothing redemptive. Some things haven't changed.

You can always count on four pieces of scrap iron lying around beyond Stoker #2. As far as I know, that's the best place for Scrap Iron in the Spiral. It's lying at the end of a high-scale 6-boss dungeon, but hey, it's sort of worth it.


Now we come to the good part of the post - I didn't just do one run of KP!

I had an idea - what if I added up the average gold totals to gauge the average amount you could make per run?
I did 10-15 runs, but I miss-categorized or forgot to note my change in gold a few times (delta-gold total if you will).
So, I have five totals. I guess the sample is representative enough for Kensington Park.

(I added the cheap Rank 4 snacks and their value - they aren't included in the original totals, as I personally don't sell snacks above Rank 3.)


Last but definitely not least, my proudest accomplishment of this post---
A good old-fashioned Reagent Map! 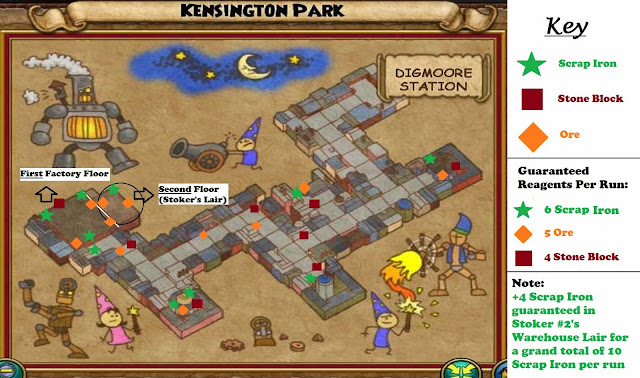 Yep. Good MS Paint work, if I do say so myself.
Also, yes, there is a set number of the reagents you will run into (if you look well enough) while doing a full run. That's 19 total reagents!

To conclude this post, I'd like to continue the theme of nostalgia and give some of my memories of Ravenwood Radio, which went off the air in an 18 minute finale Thursday afternoon. Of course, they're not done podcasting, and it sounds like we're going to be in for a surprise next Wednesday at Pieces of Eight. Nonetheless, it is the conclusion to a 92-episode, fun-filled 4 years of the best show around. I was a big listener in 2010 and 2011, but the timing of the podcast + my IRL schedule didn't match up, and I haven't been to a live show in much too long. However, I'm planning to be at Pieces of Eight in 4 nights - who can resist the excitement?

Stephen and Leesha (who was succeeded by Fallon Storm, then IcyWiz) had a great run with RR, no question. My first big memory is Episode 19 - the Kingsisle Celestia interview. Desperate for news since the announcement of Celestia in March, wizards watched in awe as concept art of the future Trial of the Spheres bosses was shown. I then copy-pasted from Ravenwood Radio afterwards. Then, of course, there were the Nightside after-parties. Who can resist staying up late to mingle with the wizardly masses? My first after-party was after the big interview, as well. Ah, to be 2010 again, posting incessantly with cringe-y material.

I won't lie, though, I miss those days. Evident by the title on Ravenwood Radio, I suppose I shouldn't be dwelling on the past, but getting ready for the good times of the future. Wizards like Kevin Battleblood and Fallon Shadowblade/Diary Of A Wizard aren't around any more, but community leaders come and go - and

the Wizard101 community continues to go in such a cycle. Our community now has some great ideas and projects going around, as Swordroll spotlighted. I'm more of a relic of the past by now who only posts on occasion, but my point is - be a part of and contribute to the "good times" and enjoy them. One great chapter of Spiral podcasting has ended, but another chapter with even greater potential has opened.


That was a weird convolution of memories and thought, but I am personally looking forward to what Stephen and his crew have up their sleeves. Let the good times go on.

Posted by Anonymous at 9:05 PM No comments: