These things always seems to come out around October-November, don't they?

Nearly five years after Malistaire's *first* demise, it is now about time for Morganthe to face the same fate (hopefully..) in Khrysalis!

Presumably, it is "so epic" that it will begin on an island, not on Khrysalis, and the final part will be released in "early 2014". Looks like they're borrowing J.K. Rowling's idea, but why not?

Of course, I'm not going to spoil any other parts for myself, so I'll just have to wait until Part 1 is live-released. But from what I have seen, I have a sense it will be somewhat similar to Dragonspyre, albeit with greenish skies. Hey, not bad. Nice way to go out for Morganthe.

...And what's this? Shadow Magic? Forbidden knowledge too dangerous for old Ambrose but not for a "wise mouse"?

The prospect of unstable spells is intriguing - it's as if you're handling or dismantling a bomb that will either go off in your own face or the enemies face. Then, there's "backlash" when a Shadow Aura expires, like getting hit by the shrapnel you blew up your enemy with. This should be fun to try out.
If that's not enough, there are also 'Shadow Pips'. Whoa. Apparently, these things feel that they should ignore all basic combat concepts in the game. We've got a lot to learn.

On a simpler note, there are also new Housing updates!

The prospect of wide open "Castle Tours" would be freaky in real life, especially if visitors felt a need to always visit your restroom. Thankfully, the Spiral is a whole lot less awkward.

Great idea and a great new addition to the Commons, overall. I opened up a couple of my own houses for visiting, hopefully I'll get some random visitors.

I wonder how many of Paige Moonshade and Cody Raventhorn's houses will be among the Top Rated? Hmm..

That does it for the updates. Going through them, I was reminded of the fact that I haven't created an end-of-Azteca quest post yet. I'll get on that before the Khrysalis content comes out, so that should be the next blog post to expect. I might also re-upload some pictures to old posts still on this laptop in the coming weeks, before I get a new laptop. All of the old blog pictures got deleted after that Blogger fiasco I had several weeks ago. Annoying!

Lastly, here's the second trivia-question-for-crowns! Last post, I started a new tradition of a trivia question at the end of every post. If you comment, tweet or e-mail the answer first, you win a select prize! This week, it's 600 crowns worth of stuff - 2 Nightmare Packs, maybe?

I have also made the comments approval-based, so if you do enter by blog comment, please leave a Wizard101 TFC or your contact information (and ask your parents if you are under 13).

Formalities aside, here's the trivia question for this post:

I look forward to the correct, 600 crown answer!

With this post comes a big blog template change - orange and black colors with a custom-made Halloween background. It does clash with the Tabs (Blog List/Archive), but I'll only have this up for 3 weeks anyway. I also re-uploaded my 3-year old header made by Wolf Redfist. I should probably change it someday (Lord Spike the Orthrus is now resting comfortably in an attic somewhere), but I still love it.

On another note, due to that mishap with Blogger (see last post), just about all of my old blog pictures now show a big exclamation point instead of the picture. That's a real bummer, but at least I didn't lose the whole blog as well, right? Still, that revelation is disappointing, to say the least.

With that duly noted, on to the new Halloween content!

It's close to midnight, and something evil's lurking in the dark...

Not quite the thrill that I had in mind.

The Halloween content arrived for October this week, bringing with it an awaited conclusion to the Haunted Cave mystery. What is inside that gate on the hillside? 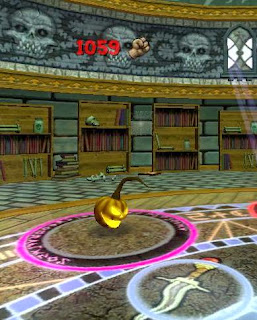 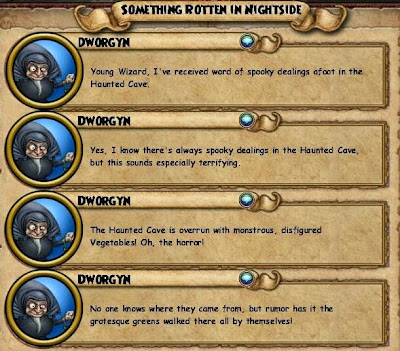 Just for fun, I Google-searched for "monstrous, disfigured vegetables".

THE THING . . .
FROM YOUR NEIGHBOR'S GARDEN!
Seriously though, that's a spooky tomato.

Fun fact: Nosferatu was a 1922 horror movie based off, you guessed it, Dracula. Because film rights were not acquired, the film was nearly lost to history after all copies were ordered destroyed. Thankfully, it had been circulated and remained available. Also, I'm pretty certain he didn't drink veggie juice.

Creepiness achieved. Definitely seems like a good watch for Halloween, I've gotta save that link for 3 weeks.

On a related note, I love his accent. 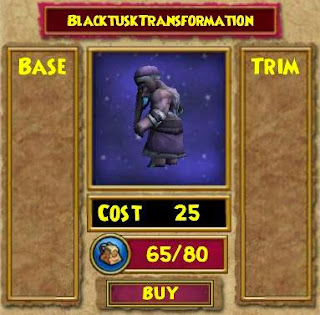 A novel idea --- every transformation, including quest-specific ones, available for a handy 25 gold. I would've thought some of the more exclusive transformations would cost more, but I'm not complaining. 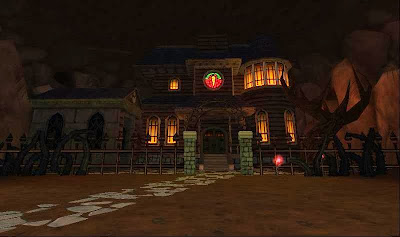 Ooh.. I wanna go inside. 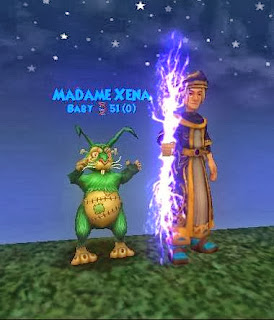 To top off the quest, I got Madame Xena. I didn't know reanimated rabbits were green. Must have been patched together in an eco-friendly fashion.

Overall, I only have two suggestions for improving the new quest:

*Level-scaling? It's a cute quest, but it's of a Krokotopian/Marleybonian difficulty level.
*Do something with the houses, nooks, and crannies in the cave. Seeing a subterranean haunted house is cool, but going inside is better.

That said, I still really like Madame Xena as a reward.

There were no other changes in the Halloween content - but why not give the towers a go, once again?
The Master Tower hasn't been worth doing since the Kensington Park rewards stopped dropping there (yes, they did once!). It's always fun to revisit Pumpkin Head, though, and get Great Spyre Gurtok rewards on an easier boss. 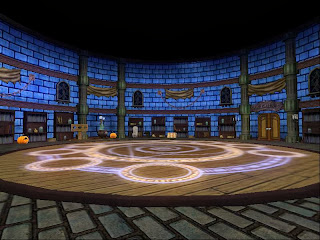 One of these years, Kingsisle will make a Grandmaster Tower. I will hold on to those hopes. (Please?)
For now though, the new quest and Frankenbunny is pretty sweet.

Last but not least, if you've got this far...

At the end of every post from now on, I *may* offer a trivia question with a prize of whatever you want in the Crowns Shop under X crowns. For this first time, it will be anything at or under 500 crowns. Items under 500 crowns include: hairstyles, elixirs, hoard packs, etc. Anything you'd like.

To answer, simply comment on this post, e-mail me (the address is above the Blog Archive), or tweet @arlendawneyes with the answer. If you win, I will give you a TFC and gift the prize to your character in-game. Also, only one answer may be submitted per question. Pretty simple.

Now that the basic rules have been laid out, here's the trivia question for today's post:

Last year (not sure it's happening this year), what somewhat rare pet was dropped from the Haunted Cave Apple Tub?

I'll update as soon as I get a correct response :)
P.S. I may have have some extra prizes besides crowns for this first question!


If you've noticed, the blog was unavailable through Monday and Tuesday night.

Blogger said the blog had been deleted, but I've fixed the problem - I had one of my e-mail accounts set as "Admin" for this blog, and I deleted that e-mail account on Monday, which wiped out The Two-Headed Wizard with it.

I must admit, I was terrified that this blog had been wiped out forever, erasing 3+ years of memories. Without a chance to recover the blog last night, I was worried to death for most of today that I'd have to create a new blog. I even brainstormed layouts and names - Arlen 2.0, maybe?

Thankfully, those ideas are not coming to fruition, as I just figured out how to re-activate that e-mail account and switch Admin settings with another e-mail.

Anyway, if anyone visited the blog in the last day, just count this as a notice that I was aware of the issue. (Plus I'm extremely relieved that I could fix it.)

In other news, I hear of some spooky announcement that Halloween brings new stuff to the Spiral this year. That is, tomorrow. I'll be there to try out Dworgyn's new quest, and will be sure to post about it this weekend. Count me in as someone who's always wondered about that Nightside door . . . just one more day until we find out.

Also, could this be Darkmoor? Maybe Polaris?

Only time will tell.

Happy Questing!
Posted by Arlen Dawneyes at 8:31 PM No comments: